Download the NoticePlease report any suspicious packages that you may come across at your home,
public spaces, educational institutions,
or businesses to 9-1-1.

Suspicious packages can come in many shapes and sizes but be on the lookout for the possible
signs:

Situations that may be cause for concern and warrant a call to 9-1-1:

What should you do if you come across a suspicious package:

Do not use cellphones, pagers, radios or any other devices that rely on wireless
communications while near the suspicious package.

Hays County Courthouse, San Marcos, TX – Hays County will close Dacy Lane at the low-water crossing near the 3800 block between Bebee Road and Windy Hill Road from March 12 through March 16.

The Hays County Transportation Department will be replacing damaged crossing pipes and installing a guard rail. The work is planned for the week of spring break to avoid conflict with school bus routes.

Traffic should detour by taking Bebee Road to the feeder road of I-35 to Windy Hill Road.

Notice is hereby given of public hearings to be held on the establishment of a moratorium on property development including the acceptance and processing of subdivision plats and site development plans for land within the City of Uhland and its extraterritorial jurisdiction; providing for enforcement, including criminal fines and civil penalties of $500 per offense. A public hearing on the proposed moratorium shall be held Thursday March 8, 2018, at 6:00 pm at 15 North Old Spanish Trail Uhland Tx,78640.

Persons planning to burn outdoors should be aware of wind conditions and delay burning if winds are expected to be gusty or high. Fires should always be attended by an adult and a water source should be available nearby.

More information about outdoor burning rules and safety is available at http://www.co.hays.tx.us/fire-marshal.aspx.

Countywide flu statistics are typically available on Wednesdays of each week, and will be reported then. Questions about the statistics, flu prevention, etc., can be directed to County Epidemiologist Eric Schneider at eric.schneider@co.hays.tx.us or 512-393-5527.

FREE Flu Shots for Anyone!

The Hays County Local Health Department is partnering with Live Oak Health Partners Community Clinic to provide FREE Flu shots on Tuesday, February 13th from 12pm to 6pm or until the supply of vaccines runs out. This event will take place at the Health Department located at 401 Broadway Street in San Marcos, and is open to anybody 4 years of age and older. We will also have FREE Flu vaccines that are specifically designed for anyone over the age of 65. You do not have to be a Hays County resident in order to receive a FREE Flu shot.

This year’s Flu Season has been one of the worst ones Hays County has seen in years, and there are no signs that it will be stopping anytime soon. Just yesterday, the Hays County Local Health Department was notified of Hays County’s first death that was associated with complications of the flu.

Since September, over 9,000 Hays County residents have visited a Health Care Provider with Flu-like symptoms and almost 2,500 of those cases had a positive Flu test. Compare this to last Flu Season when we only had 1,001 positive Flu cases from September through May.

It is not too late to get your Flu shot if you haven’t received one already. The Flu shot will protect your body from most of the Flu strains that are currently afflicting our neighbors, but even if you do still get the Flu, the vaccination provides your immune system with a boost to help you recover quicker.

Update on what’s happening at Kyle’s waste water treatment plant: city staff are encouraged by the efforts of the pumping system they installed yesterday. “What we hoped would happen is starting,” said Division Manager Treatment Operations Jason Biemer. “Our staff continue to monitor conditions in the immediate area and downstream of the plant.”

Kyle wastewater treatment plant staff will install a pump system at Plant 1 this afternoon that will mimic the function of the center well system following a mechanical failure Sunday.

“A crew is bringing in the pump from Houston,” Division Manager Jason Biemer said this morning. “Our goal is to have the pump up and running by this evening.”

Biemer also said a new replacement part for the center well was located and a contractor will verify its compatibility with our existing structure.

“We anticipate having the components replaced and plant operations fully restored over the course of about a month,” Biemer said.

The center well bearing system at the Kyle Waste Water Treatment Plant 1 suffered a significant component failure on Sunday, Nov. 26. The bearing system is the main part of the clarification process at the facility, which houses two circular plants. Plant 2 is online and functioning properly.

From a process standpoint, clarification is what removes the solids from incoming wastewater using a series of motorized rakes; those rakes help move the wastewater to the next phase of the system.

Division Manager Jason Biemer said, “Treatment and disinfection of wastewater is still occurring, meaning the outflow of effluent is still treated as it enters Plum Creek. If the solids are not removed at the same rate as normal, that could lead to treatment issues in Plant 1 and cause a disruption in Plant 2. The effect would be a release of partially treated effluent.”

Kyle’s wastewater plant permit from the Texas Commission on Environmental Quality (TCEQ) limits the amount of solids in the effluent released to 15 parts per million.

The window for repairing Plant 1 is short — several days at most — to prevent overtaxing Plant 2 and causing partially treated effluent to enter the creek.

Biemer said he believes the first step in repairing the plant is installing temporary pumps to mimic the circulation process to keep the solids moving through the clarification process. He said this option is the city’s most viable and cost-effective solution at this point in time. A secondary option would be to bring in a mobile, temporary wastewater treatment system.

Public Works Director Harper Wilder said the plant staff have been dealing with the issue since early Sunday morning.

“Our staff are working 24 hours a day to resolve the issue and get the plant back on track,” Wilder said. “They are doing continuous real-time monitoring including Dissolved Oxygen checks twice a day down stream.”

He recommended that people and animals downstream of the plant stay out of the water until the issue is resolved.

Wilder outlined the action steps city staff have already taken and continue to take to prevent untreated wastewater from entering the creek:

City Manager Scott Sellers also reached out to Uhland City Manager Karen Gallagher this morning to apprise her of the issue.

“We’re working on plant repairs and maximizing our efforts to mitigate any negative impacts to our neighbors and the environment,” Sellers said.

Despite the potential for a larger issue if the plant can’t be brought back to full health within a few days, he remained positive about the situation.

“While this was a significant component failure, we believe the actions our staff already took and continue to take will allow us to overcome the challenges and maintain a properly functioning plant,” Sellers said.

The City of Kyle is nearing the completion stage of engineering for a plant expansion that has been on the books for approximately two years. Construction on that expansion is slated to begin in spring 2018.

Waste/Recycle pick up for the holidays

Thank you
City of Uhland 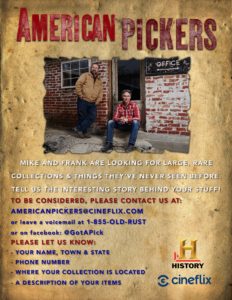 My name is Evan and I work on the television show ‘American Pickers.’ The show will film in Texas this winter. The hosts are looking for people in your area with unique antique collections and interesting stories behind them.

I attached a press release, flyer and photo, and hope you can share with your community. We are trying to get the word out as soon as possible, so the sooner people with large collections reach out to us the better.

Please make sure people who have one of a kind items to sell reach out to us on our phone number 1-855-OLD-RUST (653-7878), or our email, which is AmericanPickers@cineflix.com.

Mike and Frank only pick private collections so no stores, malls, flea markets, museums, auctions, businesses or anything open to the public.

My contact info is below, don’t hesitate to call me with any questions. Thank you so much for your time and help!

“Text to 9-1-1 is a great addition to emergency response; however, the service has several limitations so residents should familiarize themselves with them before texting 9-1-1 and most importantly remember to ‘Call if you can, text if you can’t,’” said Gregg Obuch, CAPCOG’s Emergency Communications director. A full Q&A about text to 9-1-1 is available at capcog.org/text911.

Text to 9-1-1 is the ability to send a cellphone text message to a local 9-1-1 call center. It is especially beneficial to those who are hard of hearing, deaf, or speech-impaired, but residents should only text 9-1-1 when calling 9-1-1 is unsafe or not possible.

Examples of when texting 9-1-1 would be beneficial include:

Cellphone service providers only offer text messaging as a “best effort service” meaning providers do not guarantee a message will be delivered, said Obuch, who noted that text messages also can take longer to receive or can be delivered out of order. The only way to know a text reached a 9-1-1 call center is when the center texts back. If the sender thinks a text was not received, he or she should call 9-1-1. Call centers also don’t automatically receive a cellphone user’s location information when texting 9-1-1.

Text to 9-1-1 only is available in English. However, 9-1-1 voice calls can be processed in multiple languages, because all CAPCOG 9-1-1 call centers provide emergency interpretive services. Text to 9-1-1 does not work if the sender texts using group messages, emojis, pictures or videos. Apps that text other app users (such as WhatsApp) or texting via social media (such as Facebook Messenger) do not support Text to 9-1-1.
Here are a few additional things to remember about how to text to 9-1-1:

CAPCOG also developed two video public service announcements which can be viewed at capcog.org/text911. They also were distributed to local jurisdictions to share with residents.

About CAPCOG:
CAPCOG, governed by elected officials from the 10-county region it serves, has worked for more than 46 years as an advocate, planner and coordinator on important regional issues. Programs and services related to public safety and emergency response, environmental planning, economic and community development and the elderly are delivered at a regional level to leverage funding, maximize cooperation and eliminate duplication. CAPCOG serves Bastrop, Blanco, Burnet, Caldwell, Fayette, Hays, Lee, Llano, Travis and Williamson counties.